An Australian owned and based software development company has achieved remarkable export retail success in Europe and Japan. Now it's about to be thrust into the toughest market on the planet.

Ironically, this success is all because of its presence in cyberspace. As a result, more than 80 percent of its $3.0 million sales is offshore.

GetData Software Company's Recover My Files and Explorer View this month goes head-to-head with Microsoft, Symantec and other major software companies in the cut-throat US Christmas retail market. Not bad for the two former police forensic investigators and the physicist who developed the software.

"We began to get good sales in some European territories, including Germany, Austria, Switzerland, France, then Italy and Spain. The Japanese market found us and we started getting approaches from distributors wanting to put our product on retail shelves.

"We specialise in data recovery software. Lost or destroyed files, accidentally or deliberately deleted, is a serious and universal problem. People found us on the Net and started downloading Recover My Files," GetData Software Company director Graham Henley explains."

Graham and John met while working as corporate forensic investigators for PriceWaterhouseCoopers recovering destroyed or deleted files involving some of the nation's biggest corporate failures, including HIH and One-Tel.

"The experience digging through thousands of computer files taught us a lot," Graham says.

"We then were able to develop new techniques with Brett and I believe took data recovery to a new level. The feedback we've had from people around the world, saying they had all but given up the possibility of recovering certain files or photos, has been very satisfying."

Dr Hunter is a PhD nuclear physicist formally with the Australian Nuclear Science and Technology Organisation (ANSTO) and the author of a number of scientific research papers.

"Everyones increased dependency on information technology in both work and play, combined with the rise in online threats ready to strip us of our electronic assets, has meant that the need for personal data recovery software is greater than ever before," John Hunter says.

"We see a sales spike with every new virus that does the rounds. The latest was MyDoom, which had a nasty payload which deleted Microsoft Word, Power Point and Excel files. Recover My Files can get back those files struck down by a virus.

"It's been quite a learning curve. We obviously wanted to open up retail markets as well as selling off our website, , but we didn't expect it to happen so quickly.

Explorer View, which works inside Windows Explorer, came out of needing a quicker way of seeing what's in files without having to open and close, open and close numerous files until you found the right one."

The company is undergoing an 5 to 10 percent monthly growth rate, will pass $3 million this financial year and has new products about to come onto the market. They plan to launch into the Australian retail market next year.

The predictable question: when will they float publicly? "Not this year. We are very focused on getting our development right, we have our US launch coming up and also we're carefully managing our growth. But it is certainly an issue that we have considered." Hunter adds. 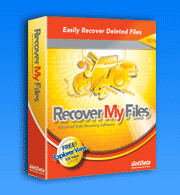